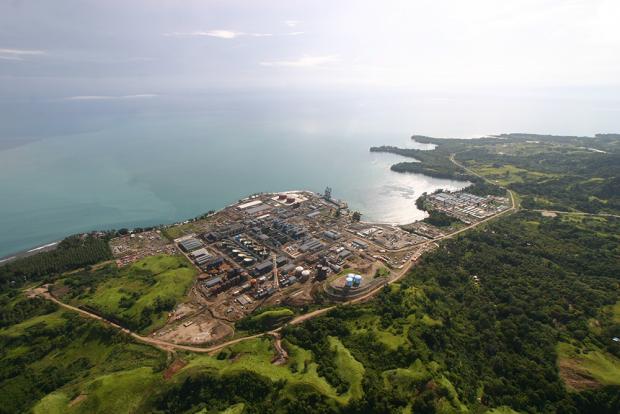 On the Ramu River in Papua New Guinea, the Songnor have thrived for 6,000 years living in grass huts on stilts, dependent on the river, forest and household gardens for sustenance. In Bosmun village and upriver in Kurumbukari, the Songnor catch fish in hand-woven traps, white and purple yams are dug from dark soil, and edible starch is laboriously extracted from the sago palm. The village is surrounded by incredible biological diversity, with tree kangaroos, orchids and birds of paradise seen nowhere else in the world.

Papua New Guinea is not only rich in biological resources, however. Described as “an island of gold in a sea of oil,” Papua New Guinea's mineral wealth and petroleum reserves have drawn scores of international mining companies in a rush to stake their claim on the landscape.

Indigenous people living along the Ramu River fear that runoff from the ongoing construction of the massive Chinese government-owned Ramu NiCo mine will poison their water, fish and gardens, and destroy their environment. Those along the coast worry about about the mine waste being dumped at sea and its effect on their health and fisheries.

Says Melchior Ware, village elder and clan leader of Bosmun village, "The land has always been a communal property for the people. We are only guardians. We have a different perspective. We are guardians of the land. We belong to this land, it is our source. We, in return, regard the land, the environment, and the river as sacred because they provide to us life. If you’re going to cut off the very source of life, we are most likely to fight—and we will fight."

Papua New Guinea occupies the eastern half of the Melanesian island of New Guinea and several smaller islands. The country’s motto, "unity in diversity," is apt: it is one of the most ethnically and biologically diverse countries in the world.

Some 60 percent of this mountainous land is covered by tropical forest, representing, along with neighboring West Papua, the world’s third-largest intact rainforest. The forests contain an estimated 5 to 7 percent of the world’s biodiversity. A country just shy of 6.5 million people, it also possesses a wealth of natural resources beneath its largely non-arable land.

There are more than 800 indigenous languages spoken by the people of Papua New Guinea, and a stunning range of cultural diversity. Most people live in small communities, where they practice subsistence farming and depend on the forests, rivers and sea to provide their food, water, medicine and building materials. Eighty-five percent of the residents continue to live off the land.

Rather than being bought and sold, land is passed down through generations, and it is a source of identity and spiritual connection as well as survival. Ninety-seven percent of the land in Papua New Guinea is under legally recognized customary-land title, meaning that the country’s indigenous people have rightful ownership of the traditional lands they occupy.

The Ramu River begins in the Kratke Range and runs almost 400 miles to the Bismarck Sea in northern Papua New Guinea. Though largely unnavigable, the Ramu River is home to the Dumpu, Bundi, Atemble settlements, among others. Located on top of a rich mineral deposit, Kurumbukari village was once home to about 1,000 people. Kurumbukari villagers have lived in the area for 6,500 years and regard the Ramu River as sacred because of its vital role in sustaining their traditional way of life in addition to being their primary source of food and water.

Begun in 2008, the Ramu NiCo (nickel and cobalt) mining project in northeastern Papua New Guinea consists of three parts: the Kurumbukari mine site, the Basamuk refinery, and the 135 km pipeline that transports slurry from the mine site to the refinery located on the coast. Once the nickel and cobalt are extracted at the refinery, the waste—including arsenic, copper, chromium, cadmium, mercury and high levels of ammonia—are pumped through another pipeline and dumped 150 meters deep into Bismarck Bay.

The mine is owned by China Metallurgical Group Corporation (MCC) and is expected to operate for 35–40 years. The company claimed the mine "showcases the strong commitments of the [mining] company in building sustainability and mutuality for both the Project and the local community," which led some local residents to see it as a potential boon, offering medical and educational infrastructure to their remote villages. That opinion changed once they realized the scope and impact of the enormous project.

The village of Kurumbukari sat on top of the mineral riches, so China Metallurgical Group Corporation gave the residents a week to move out, spray-painting "Out" on their homes. The company offered them $230 to move to Snake Mountain, but that area is considered taboo, traditionally off-limits to any activity. For people who are so connected to the land, this was unacceptable, making them "feel like animals." Those few who stayed were forcibly removed; their houses destroyed before their eyes.

Despite legal challenges, the mine is in operation. Erosion run-off degrades water quality and has destroyed traditional fishing grounds downstream. An even greater concern is the potential contamination of their food supply. Along the river, people depend on river flooding to irrigate their yam and sweet potato crops. Heavy metals and other pollutants running downstream from the mine could destroy this critical food source or make it inedible.

At the Basamuk refinery, Sama Mellombo, a clan leader of a village near the refinery, is outraged that the mining company destroyed his clan’s cemetery in violation of the explicit instructions of their permit. The company suffered no consequence for this illegal activity.

The people along the coast near the refinery are dependent on Bismarck Bay for fishing, bathing, salt and medicine. They were concerned about pollution threats from the tailings to be dumped into the sea. The theory behind deepwater disposal is that the mine waste, which is denser than seawater, will sink to the seabed and stay put. But the theory discounts the likelihood of currents and upwelling bringing the pollution into shallow water and dispersing it, compromising the health of the marine environment. This waste includes arsenic, copper, chromium, cadmium, mercury and high levels of ammonia.

The government hired scientists to assess potential harm to marine life. When the scientists warned that the damage could be widespread, it suppressed and ignored their findings. Later, when coastal landowner clans sued over the mining company’s "deep submarine tailings placement," which would dump 14,000 tons of toxic waste per day into the bay, the government passed a law that denies citizens the right to appeal any permit granted by the Department of Environment and Conservation, regardless of its impact on health, livelihoods and cultures.

With Bismarck Ramu Group, a community organizing collective, Sama Mellambo and Melchior Ware allied with other local leaders, filing lawsuits to stop construction of the mine and dumping of waste into the sea. Outraged by the backroom deals, inequitable compensation and irreversible impacts on land and water, landowners who have only recently been introduced to the cash economy are now banding together to protect their traditional lands and sacred places from development by major multinational corporations. So far, they have had little effect. The mine and deep sea dumping continue unabated.